Since September 12th I’ve dropped the ball for a while. The usual weekly post should be back soon. Also, I’ve added a substack site and will cross-post same content there, Substack is a publishing platform with a better email delivery experience. Sign-up there if you want to get the post delivered directly to your inbox.

Before we wrap up there are 2 pieces of posts I find worth mentioning. The first is one about the new Apple Watch 6 series release, in which the author highlights how Apple is building a health platform:

Health monitoring is one of the key new tasks that the Apple Watch, not iPhone, handles. To be more precise, Apple Watch is handling the following four health-related items:

On one hand the blood oxygen sensor has already been reported as inaccurate; on the other hand, it is impressive to see how successful the pivot of Apple Watch towards health has been. I don’t think it could ever become the true medical device people put their lives on, but easily the closest thing to the wellness device - it just makes sense for the watch on your wrist to track workouts and activities, and maybe even sleep. Think about how Nintendo Ring fit became a culture phenomenon and sold-out everywhere: Apple Watch and its Fitness+ service is basically that with more powerful tracking, bigger ecosystem and broader audience. Again it just makes sense. Although the only concern is now that Apple has its own fitness service, would it grant same access and resource for 3rd-party devs to build more. It’s the best move for consumers, but not necessarily for Apple.

Two more angles that put Apple Watch in a great position. First of all, as much as we’d like COVID19 to go away already, it certainly make people aware of their health a lot more, hence benefiting all things health-related including Apple Watch. The second is the ability Apple has to make a product or a category popular or attractive is critical. Google launched Wear OS one whole year earlier than Apple Watch with multiple partners. But until Apple Watch comes out, smartwatch is a nerdy gadget (think pebble) more than a day-to-day computer.

Lastly I find this graph explains a lot how Apple works: 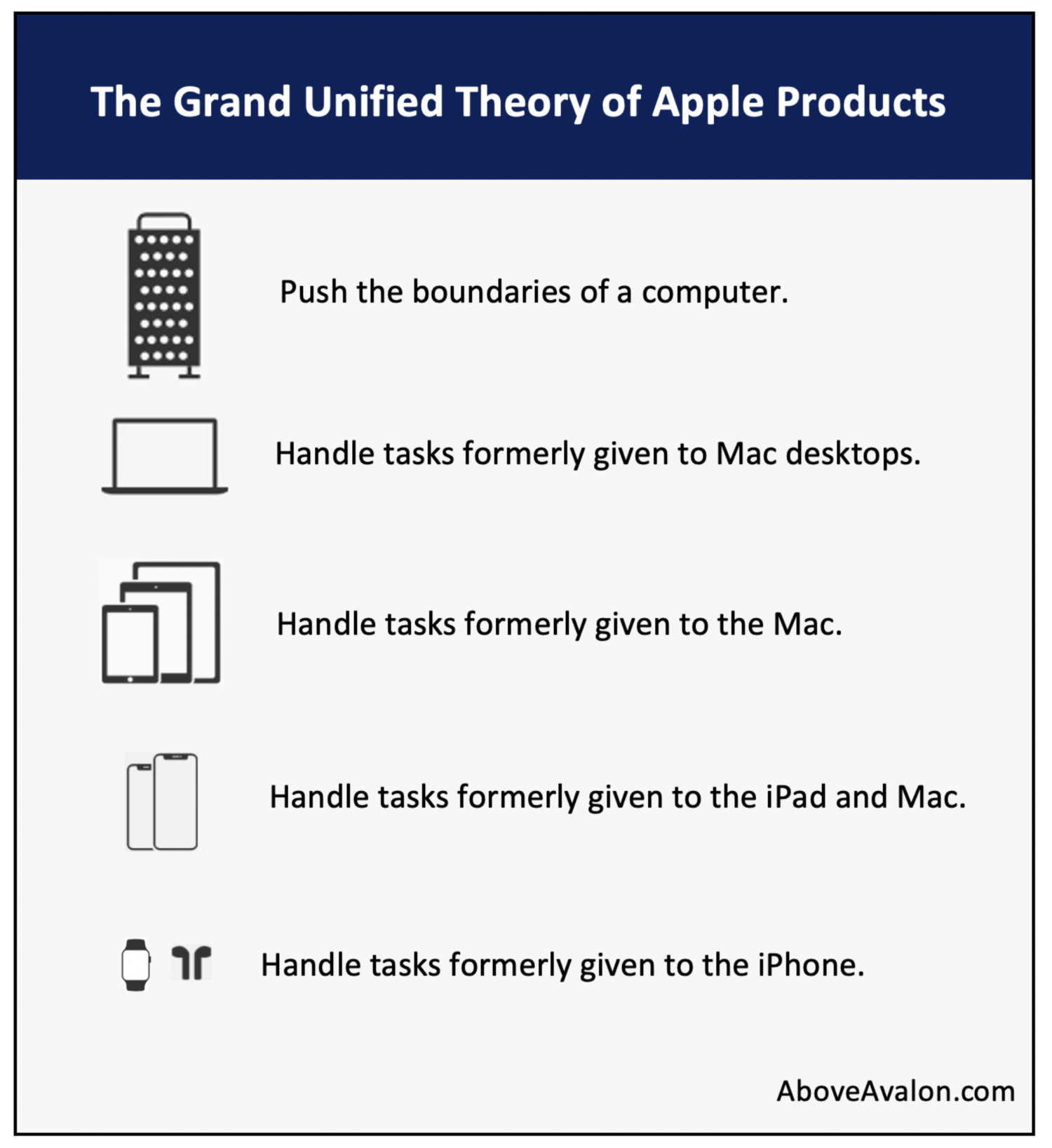 I don’t think the first one stands other than it does push the price of the monitor stand and wheels, but rest is quite spot-on. Similar sentiment from analysts at Asymco:

The Watch has taken on the job of health monitor and health preserver. It isn’t a job any other computer would have even attempted.

The story of phones, tablets and wearables is a story of creating new markets, not substituting for old ones. In so doing the new markets are greater than their putative substitutions would allow. This is happening over and over again but it still seems to go largely unnoticed. Keep an eye out for a lot more of this.

The 2nd piece is also about platform - a gaming one. Amazon launches a cloud gaming serving called “Luna”:

At its 2020 hardware event today, Amazon announced a cloud gaming platform called Luna. The news isn’t too surprising: the service has been rumored since last year, previously codenamed “Tempo,” while an Amazon-made game controller leaked out just ahead of today’s event. […] The service will be available for an “introductory price” of $5.99 a month during its early access phase, which gives subscribers the ability to play Luna Plus channel games across two devices simultaneously and offers 4K / 60fps resolution for “select titles.” Naturally, it will be powered by AWS, Amazon’s ubiquitous web platform.

The business model is similar to that of Spotify on music or Netflix on video: pay monthly for the unlimited access to a big selection of titles streaming to you, no download/installation needed. This is the newest entry of the trend: Apple launches Arcade for iOS, Google launches Stadia, and Microsoft plans for xCloud and its Xbox Game Pass.

While the angle and platform details might be different (e.g. Arcade does require app download per game), it is interesting all the tech behemoths are hitting the gaming subscription model. It’s probably because (1). gaming market is a huge one; (2). the current business model (pay per game title) makes no sense at all. Gaming is also way more engaging (i.e. addictive) than other content like music and video.

Another interesting thing is how every company seems entering with its own best strength: Google/Amazon with their cloud infra, Apple with its 3rd-party devs and Microsoft with its Xbox platform. It is difficult to see who would succeed, and one can also argue they can co-exist. That being said we have already started seeing critics on Stadia and Arcade, the 2 earlier-launched players.